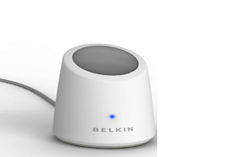 Where IBM failed with their Aptiva line of computers back in the late 90’s Belkin hopes to revive this year with the introduction of their new product: WeMo. The WeMo is a wireless accessory that plugs into your walls and allows you to control that outlet from a special application that is set to work on just about any mobile device. Sounds awesome, doesn’t it?

The WeMo system works with your homes current electrical system and only requires a Wi-Fi connection and a free smartphone app to set up the switches.  Through the provided application you can set your outlets to turn on or off at the push of a button or set those to a set schedule to give the appearance that one is at home.  Another product set to be released soon; the Belkin WeMo Sensor not only connects to your Wi-Fi connection but also contains motion sensors that react to movement.

Some of the features of the WeMo system include:

You can get the Wi-Fi outlet adapter for $49.99 a piece and the motion sensor outlet adaptor for $79.99 each. Belkin is already working on various other inventions revolving around your Wi-Fi network including a garage door opener, baby monitor, door knocker, and door bell ringer! With this kind of home customization propelling us into the future it’s anyone’s guess what else Belkin can invent to hook into their routers!

Update: Unfortunately the Belkin WeMo is still not available in Germany although the company announced a release date for early November 2012.